Ferrets For Sale
By most definitions, ferrets are considered to be a domesticated animal. They descend from the European polecat with perhaps a few other ferret species mixed in their genetic history. They are in the family Mustelidae, which also includes weasels, wolverines, otters, and mink. Ferrets are strict carnivores and have very slender, flexible bodies that they use to enter underground tunnels to hunt prey in their wild state. Due to this, ferrets have historically been used to flush out burrowing animals like rabbits and rodents from their holes.

WILD HISTORY:
Ferrets are mustelids. This group of animals is named for the fact that they have distinct musk glands, which are often used as a defense mechanism when they are threatened. Badgers, wolverines, otters, mink, weasels, black-footed ferrets and polecats are also mustelids. Ferrets do not have musk glands that are as powerful as those of the skunk nor can they “spray” their scent. Ferrets have been domesticated for more than 2000 years and have been kept as pets in America for about 300 years. They were, and still are in some countries, used to hunt rabbits, as they are quick, slim and very good at flushing rabbits and other small mammals out of burrows. They are illegal to have in some countries. Ferrets are illegal to keep in many states and/or cities in the U.S. because of the fear that they will reproduce quickly and become agricultural threats if accidentally released. However, most ferrets sold as pets are spayed or neutered before being sold as pets, so the chance of this actually happening is slim. Some other states and cities require a permit to keep.

PHYSICAL ATTRIBUTES:
Ferrets have slim and slinky bodies, but should not be skinny. They have small, rounded ears and tiny dark eyes. Ferrets do not have good eyesight, but their keen senses of smell and hearing more than make up for this fact. Ferrets are available in a variety of colors including sable, white, seal-point and albino. Most ferrets for sale in the U.S. pet trade have had their anal scent glands removed; however their skin also releases a small amount of musk, so a scent is still present. Most people are not extremely offended by this scent. Many ferret owners exacerbate the scent problem by over-bathing their pet, which dries out the skin and therefore prompts the skin glands to produce more oils to compensate. Ferrets have the typical teeth of a carnivore, including pronounced canines. Tails are approximately five inches long.

NORMAL BEHAVIOR & INTERACTION:
The “furo” portion of the scientific name for ferret is derived from the Latin word “furonem”, which means “thief”, and any experienced ferret owner will tell you that this description is extremely accurate. If you are ever missing any shiny objects, check your ferret’s favorite hiding places first! Ferrets are crepuscular (most active at dawn and dusk) and sleep about 14-18 hours a day; the remaining time is spent playing and entertaining their families and playmates. When excited and playful, a ferret will exhibit what is known as the “weasel war dance”, which is characterized by seemingly uncontrolled happy sideways jumps, which often end in banging into furniture or each other. Ferrets are very social animals and prefer to live together with other ferrets. The best toy for a ferret is another ferret!

VACCINES:
Most states require that ferrets receive a regular rabies vaccination. Rabies vaccine is first administered at 12 weeks of age, and then once a year for life.

It is strongly recommended by most veterinarians that ferrets also receive distemper vaccines. Ferrets are extremely susceptible to Canine Distemper Virus, which is virtually 100% fatal in ferrets. Distemper vaccine is administered to baby ferrets at 8, 11 and 14 weeks and then once a year for life.

An exotic veterinarian who routinely treats ferrets will have the proper brand distemper and rabies vaccine for ferrets on hand. It is not recommended that they receive both vaccines within the same week, as it will increase the chance of a negative reaction to one of the vaccines.

FEEDING:
Strict (obligate) Carnivores. Ferret digestive tracts have no ability to pull nutrients from grains or other plant matter, so good ferret foods should not contain large amounts of these ingredients. Ferrets have very short digestive tracts and a very high metabolism, so they have to eat often. Make sure fresh food is available at all times. Ferrets generally eat only what they need and do not become obese from overeating. If your ferret seems overweight, see your exotic pet veterinarian as there may be a medical reason for the weight gain or you may need to change your pet’s food. Ferrets tend to imprint on their food and are therefore very difficult to switch to a different food if that primary food becomes unavailable at any point. Because of this fact, many ferret experts recommend feeding a variety of about three different foods. This also provides a variety of flavors as well as nutrients. Commercial ferret foods should have 34-40% protein and 19-30% fat with extremely low carbohydrate and fiber content. Chose foods with ingredient panels that list actual meats and meat meals such as chicken meal and egg as opposed to meat by-products (meat waste products from human grade food manufacturing). Ingredient panels list items in order of the total weight of each ingredient in the food. The highest quality ferret foods list meats or meat meals as the first three ingredients. Also look for good levels of omega 3 & 6 fatty acids (among the first 6 ingredients). Avoid products with high levels of ingredients such as corn gluten, soy meal, and vegetable and grain items. Also be careful of hidden sugars in the form of sucrose, fructose and corn syrup 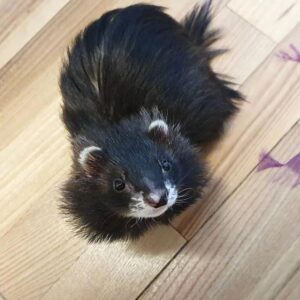 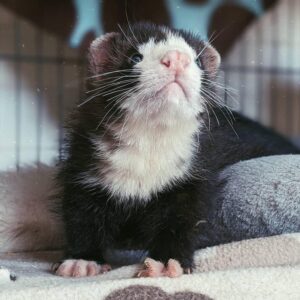 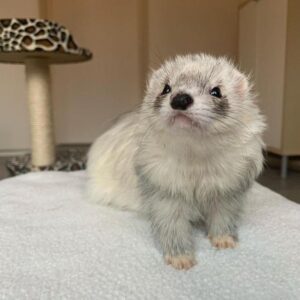 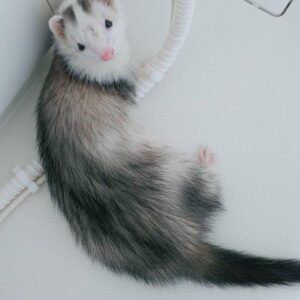 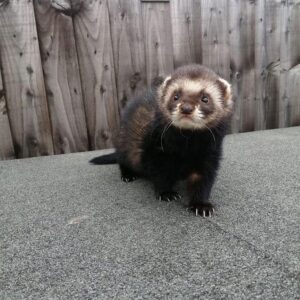 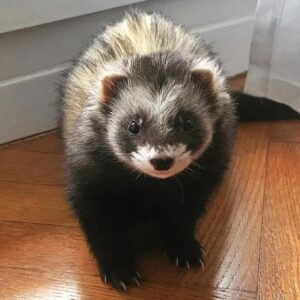 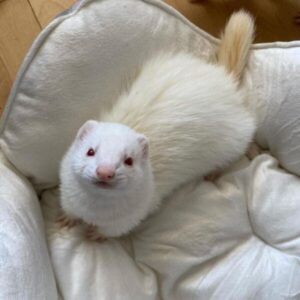 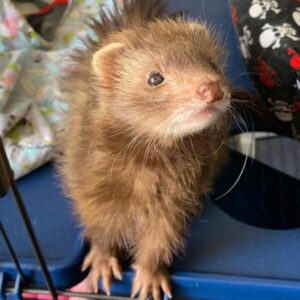 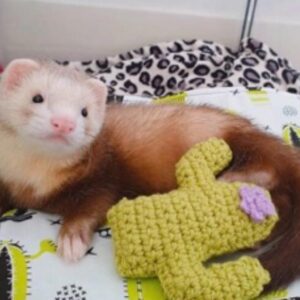 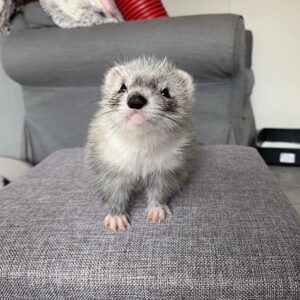